An Extra Pair of Hands!

It's such a relief to feel the warmth of the sun once more, talk about April showers, it rained practically all last month!
Remembering to say "white rabbits" out loud in bed on the first of May as I opened my eyes, with the hope of drawing any odd bit of good luck that might be going, on the other hand, our poor 'wet rabbit', was busy drying off her ears in the garden! 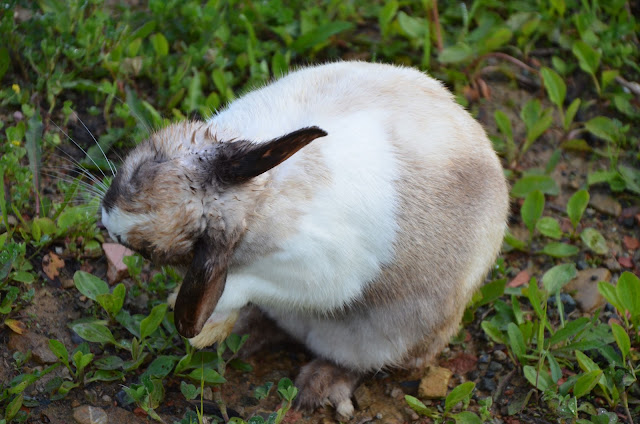 So delighted to have a new camera recording events once again!


My sister, nephew and nieces arrived for a few days, to celebrate Jule's 50th...you are catching up Sis!!!

Cameron loved it so much Jim arranged for him to return 5 days later, after fulfilling commitments he had at home.

Em took the train down to Pisa greeting him at the airport, helping Cameron with his journey to us.

Happy to help us with work in the garden Cameron and Em were keen to get started on the first project  which was to dig a small trench under the kitchen window, where I had planned to plant a row of Box.
A tough job due to claggy, stoney ground which in parts still hid the odd bit of builders rubble! 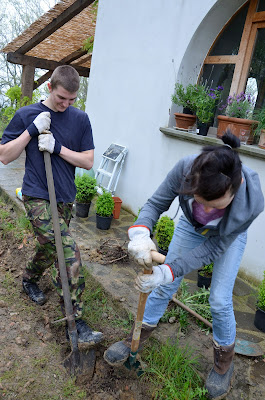 The cousins set to, with great gusto! 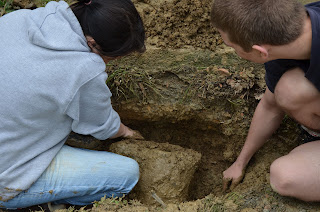 Well that was until they hit upon a huge beast of a rock embedded in the clay like soil..........hoping to thread a rope underneath they dug further using their hands!
Worse was to come...it was far bigger than they had thought....it was time to ask an expert local farmer, our good friend Mauro!
He arrived with a suitable long metal tool and managed to lever the 'beast'.............together Em and Cameron pulled the rope, and in between shots I ran backwards and forwards with river stone adding height, placing one on top of the other so that the  rock could be gently manoeuvred up and out of the trench!!! 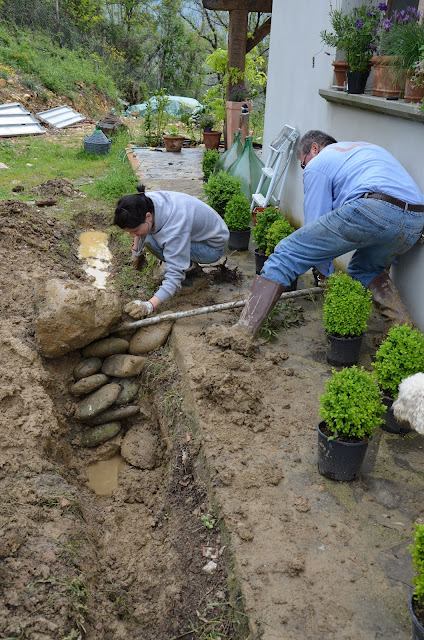 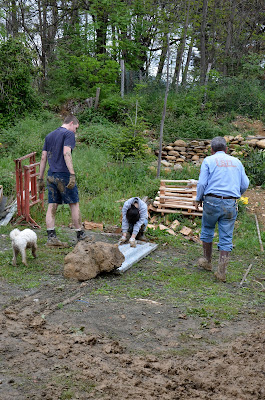 A huge sigh of relief all round as the rock was dragged away on a sheet of metal! 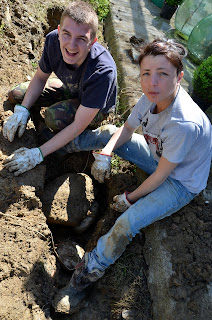 The following day, much to Em and Cameron's dismay, they stumbled across another rock, not as large as the first... they were determined to fight this one alone! 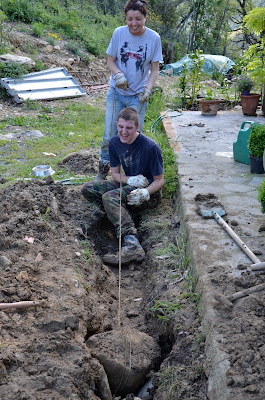 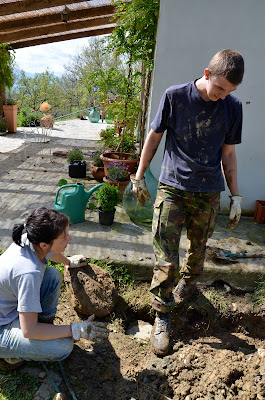 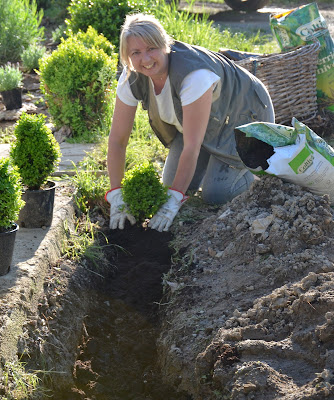 A layer of stones, manure and compost before the pleasure of planting!
Not sure what Alan Titchmarsh would think....but firmly pressing each plant into the soil, I certainly sent thoughts of love and hope down to the roots!
We were all so thrilled once we could stand back and look at how much we had achieved!!! 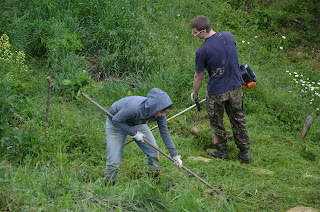 Upwards and onwards, Em and Cameron began the huge task of strimming the land, creating small heaps of grass so that it could dry in the sun and be used by Wabbit for lining her home! 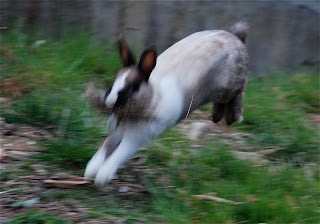 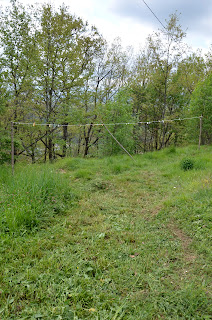 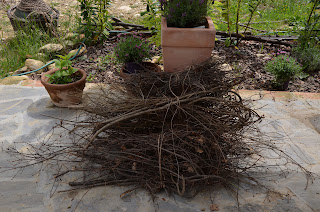 And..........sticks were bundled into kindling for winter.
Posted by Karen Hargadon-Feeney at 22:56 No comments:

I am a photographer, passionate about this unspoiled area of northern Tuscany, drawn, not only by the sheer natural beauty surrounding us, but also, by the warm embracing Italians who have lived here for generations.

It goes without saying, I love the food and wine, but, in particular, I am impressed by the whole concept of eating all that is grown and produced in this soil organically, in this area.

Every meal is a celebration drawing family and friends together around one table, enjoying what I believe to be a very crucial basic element of our lives.

I love the fact that great granny and the newest born are around the table, with all the generations sharing stories and laughter, perhaps even tears, in a place where naturally traditions and family history are passed on.

I feel we need to know who we are and where we come from as one of the basic threads of our wellbeing.

For me, there is no greater feeling than sharing food around a table!

Mountain views, breathtaking natural scenery, an abundance of wild flowers and butterflies, ever changing light and colour sustains me beyond my wildest dreams!

My journey in getting here, to this point in time has been a difficult one, I had to almost move a mountain to create what exists today, in the haven I enjoy with my husband and two lovely daughters.

Indeed it was our strong partnership,my husband working away from home to provide,combined with my dedication that carried us through.

The cost and effect upon us all has been challenging to say the least.

It hasn’t been without tears being shed unimaginable stress combined with feelings of utter desperation.

However, with every negative, is a positive, this difficult path has shown so many good things along the way and has been a learning curve about life. So, with the past behind me, the future not here yet, my motto is "live the day".

Live and enjoy life each day and I literally count my blessings!

My aim with this Blog is to share all the joys and wonderful encounters which occur from time to time, together with photographs, perhaps occasionally poetry, recipes and anything else I think you may be interested in.

I hope you enjoy and I welcome your thoughts, emotions and input!